Is this the end of “the era of poverty”?

Recently, Zelenskiy’s influential patrons have several times expressed their unhidden interest in Ukraine’s possible economic default. This may end up being only the top of the iceberg of disappointments and revelations for many Ukrainians, who were sincerely hoping to end “the era of poverty[1]”, as promised by newly elected president Zelenskiy, as well as to improve their living standards. Economic situation in Ukraine over the past couple of years can hardly be called challenging, and in several cases it has actually demonstrated possibly the best performance in the modern Ukrainian history. The nearest future, nevertheless, does not bring any optimistic promises. There are several reasons behind the pessimistic scenario – starting from the obvious unfavourable global economic trends to the new government’s, who is hoping to soon form the parliamentary majority, lack of understanding and economic strategy.

Do we only appreciate what we’ve already lost?

Various recently conducted public opinion polls have only proven that the vast majority of Ukrainians are still very dissatisfied with the situation in country. Pro-Russian politicians, especially those with the close ties to Viktor Medvedchuk are vigorously trying to enforce an idea that Euromaidan, and the subsequent war with Russia somehow caused the entire collapse of Ukrainian economy. Reality is very different though – since 2014 Ukrainian economy has not only recovered compared to pre-Maidan and pre-war times, but in several sectors it has actually showed a noticeable growth. Official data provided by the State Committee of Statistic of Ukraine show that the real GDP index in 2018 did indeed show that economy’s growth has slowed down by 2.2% compared to 2014, and on 8.7% compared to 2013. At the same time, Ukraine’s population without Russian-occupied areas in Donetsk and Lugansk regions has fallen to 38.8 million in 2018, while in 2014 this amount constituted 43 million (including occupied territories); in 2013 this number amounted to 43.14 million. Therefore, compared to 2013 Ukraine’s population has decreased by 11%. Thus we can see that the real GDP per capita index in 2018 has not only reached the 2013 levels, but in 2019 it does promise to be even higher.

Ukraine’s levels of export in the period of January-April 2019 have been 3.8% higher compared to the same period in 2014, despite the fact that at that time considerable share of country’s export was supplied by the nowadays occupied territories. Ukraine’s agricultural output in 2018 was on 9% higher than in 2013. Industrial output of Ukrainian economy in January-April 2019 has exceeded the 2015 levels, the time when active phase of Donbas military operations was suspended, by 7.1%.

Several sectors of Ukrainian economy, which have only recently had very little importance for the overall growth, are currently growing much faster than the old ‘traditional’ sectors. While dynamics of growth in several ‘young’ sectors are higher, the general growth of economy or the GDP still remains relatively mild due to the fact that importance and influence of the ‘young’, fast growing sectors is smaller than those ‘traditional’ sectors. At the same time, sooner or later planned economic diversification will undoubtedly prove its positive role for Ukraine’s economic sustainability and its ability to resist sectorial shocks and various negative global trends.

Additionally, Ukraine’s public debt in April 2019 amounted to $79.8 billion, which is a 9% increase compared to the early 2014. It is a considerable hike, especially bearing in mind the fact that country’s gold reserve has grown by $6.1 billion since February 2014, when the Euromaidan protests brought down the regime of Yanukovych, until April 2019 (from $15.46 billion to $20.52 billion). This happened primarily owing to the IMF loans, which have been used to increase gold reserve, but have also contributed to the increase of national debt.

The real wage in 2018 has grown by 9% compared to 2013, increasing in 2.9 times, while the costs of living have been increasing much slower. If we compare this data to the early 2014 indicators, the progress is even more evident. For instance, the average wage has increased to UAH 10,200 in March 2019 compared to UAH 3,400 in March 2014. Even if we convert this amount into euros, it will still be a 1,7 times increase from €212 in March 2014 to €340 in March 2019 – despite the fact that hryvnia has lost more than half of its value since then.  The growth in the industrial sector was even more evident – in this sector the average wage has increased from €243 to €392 over the past five years. Public sector workers had their salaries increased from €161 to €253 in education and from €148 to €226 in public healthcare.

Such pace of growth is probably one of the highest in Europe. The reason behind many Ukrainians’ dissatisfaction with the situation is the fact that despite an evident progress, level of their income, sadly, still remains one of the lowest in Europe, especially in comparison to the EU member states. National Bank of Ukraine (NBU) has rightly pointed out in their inflation report, that one of the key reasons behind the economic growth is domestic demand and increase of retail trade, which is result of growing wages. Additionally, according to the NBU report, correlation between Ukrainian and EU salaries has visibly improved, which has subsequently decreased the number of Ukrainian economic migrants. According to businesses’ estimation, throughout 2018 and in the early 2019 a lot of companies have reported the lack of qualified specialists and professionals. Easier access to the European labour market as well as the long–term demographic tendencies have been the key reasons behind this situation. This does not diminish the sole fact of an evident income increase among Ukrainians. 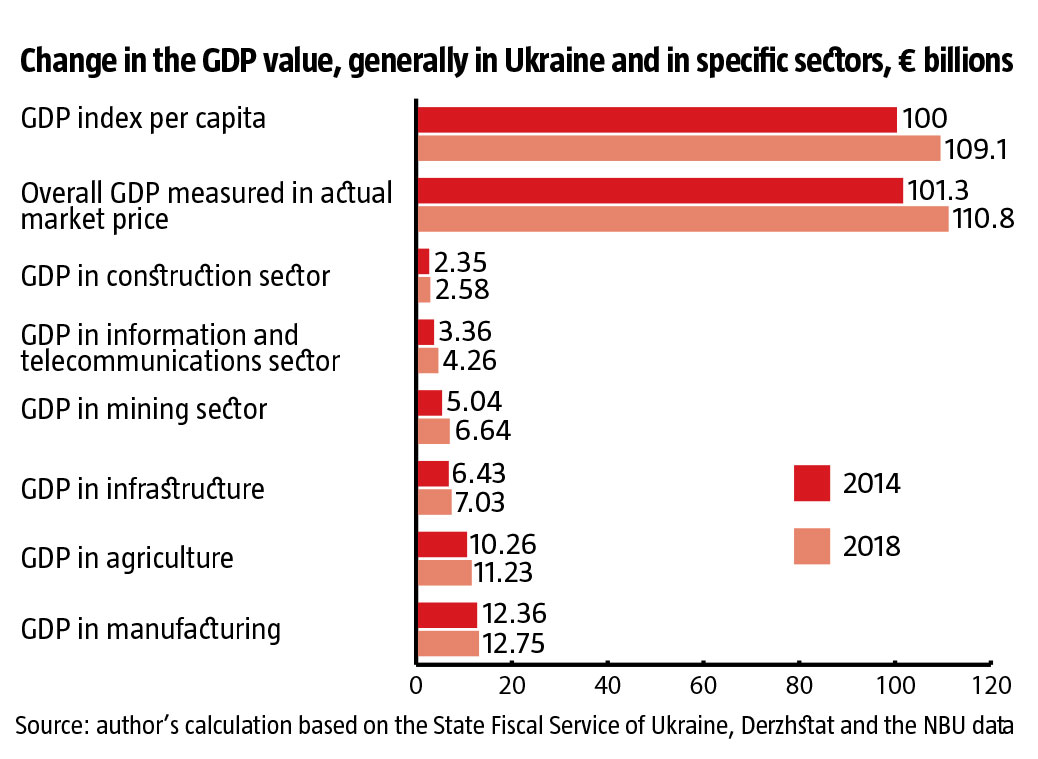 It is understandable, that, despite the quick recovery and relatively high level of growth compared to the pre-war period, an impoverished country like Ukraine would have very little chances to quickly join the club of wealthy and economically developed nations.

At the same time, it looks likely that the world economy will soon immerse itself into the new cyclic economic crisis, which will undoubtedly be a painful blow to dependent and poorly diversified Ukrainian economy. Thus it is possible that we will soon be witnessing Ukraine’s economy entering the downward spiral, when each economic cycle of growth and decline will bring Ukraine down lower and lower. As a result, despite the periods of relatively dynamic growth in 2000-2007, 2010-2012 as well as 2016-2018, Ukraine’s real GDP remains at best 1.6 times lower than in 1990.

External factors may also cause rather negative impact on Ukrainian economy.  Global economy is facing an upcoming cyclic crisis, especially when it comes to raw material sectors. Ukraine is running the risk of suddenly discovering that that “challenging economic situation” and “the era of poverty”, as it was called in Zelenskiy’s presidential campaign, was in fact possibly the highest point of the most accelerated growth in Ukrainian modern history. The negative global impact may also be intensified by bitter rivalry between the world’s top economies.

In such circumstances, in order to break out the downward spiral cycle, Ukraine needs to conduct radical changes in its national economic policy. At this point it is not enough to return to the economic levels of 2013, or even 2008 or 1990, which are nevertheless higher than current ones. Ukraine needs to drop the idea that it is possible to somehow redistribute the economic wealth within the current corrupt oligarchic system. Instead, Ukraine has to develop a strategy to grow the economy and set such a distribution mechanisms, which will encourage everyone to contribute to its increase. The Ukrainian Week has previously published a number of articles dedicated to the nature of necessary economic policies.

This will be the only way for Ukraine not only to break the current stalemate, but to also become a competitive player in the aggressive fight over the place under the sun in the modern day world economy. Ukraine has to give up the philosophy of endless redistribution of the national wealth, abusing the remaining bits of this wealth.

Without the sweeping change in its economy Ukraine will face hard times in the current turbulent world. The last cycle of economic crisis began 12 years ago. Despite governments’ and national central banks’ efforts to delay the new upcoming crisis, the rules of the market economy showed little will to compromise. Thus very soon Ukrainians will be once more reassured that in the real life, as opposed to the movies, the real end of “the era of poverty” requires decades of hard work and well-thought national economic policy. 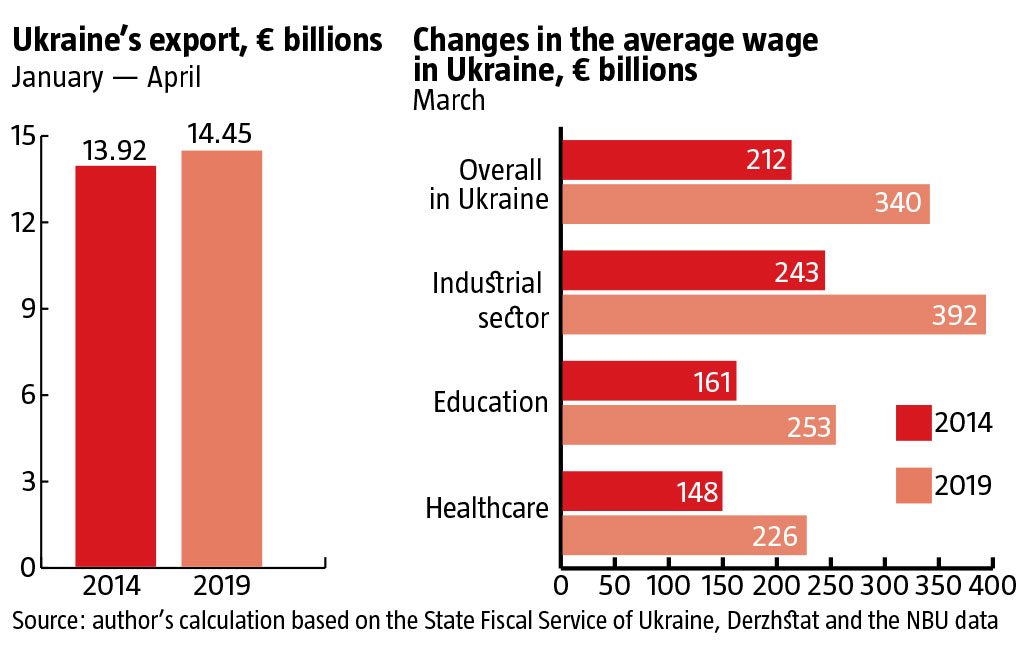 The new president’s team members, particularly those from Sluha Narodu (“The Servant of the People”) newly-formed political party, which has also announced its ambitions to form the parliamentary majority, have shown very little understanding of the necessary strategic changes. Whilst during the presidential election campaign they may have deliberately avoided this question, claiming that developing social and economic policies is the prerogative of the parliament, now, with the upcoming parliamentary elections it would give the new party the chance to present its model for the future economic strategy. This could be the opportunity to present their vision of multiplying and growing the national wealth, rather than redistributing it in the old fashioned manner.

Otherwise, Ukraine is running the risk of returning to the downward spiral fall and recession, with the government trying to conceal its failures and the real state of affairs behind the fruitless “fight against corruption”, looking for scape goat, and traditional fuelling the hatred towards the rich. Since this will coincide with the predicted aggravation of the global economy, many Ukrainians will nostalgically miss the times of the relatively stability, which is about to end right now; even despite the fact that even now nothing has been done to systematically correct national economic policies and turn the state into an effective tool of aiding and supporting economic growth, as well as encouraging the productive work and respect for its results.

[1] “The end of the era of poverty” was one of the slogans of Zelenskiy’s presidential campaign.

Barracks in place of a resort